That’s right! Office Mayhem was chosen by Champlain College to represent the school at PAXEast this coming weekend in Boston. This is such a huge honor for us as there is no lack of talent or amazing projects at Champlain right now. Be sure to stop by if you’re attending the conference! It’s acting as a big morale boost for the team, even though there’s been no shortage of inspiration this past week. Norman has been hard at work finishing up more character heads, and we’re trying our hardest to get four distinct characters in for PAX. Andy and Andrew have finally gotten the character animations into the build, and they add so much life to the game. Richard has added a new round of sound effects for our new office toys. I have finished adding the rest of the base tasks and interruptables, allowing us to focus more on group interactions in the coming weeks. We also have added Konami code detection to the start screen, which rains down the entire alphabet for true Scrabble gameplay. We also have cleaned up the rougher edges of the code base, which has in the process squashed the majority of the (relatively few) bugs that have popped up at QA recently. If I could say so myself, Office Mayhem is shaping up quite nicely: it plays smoothly and has a nice amount of polish to it, and I hope that shows well at PAX. 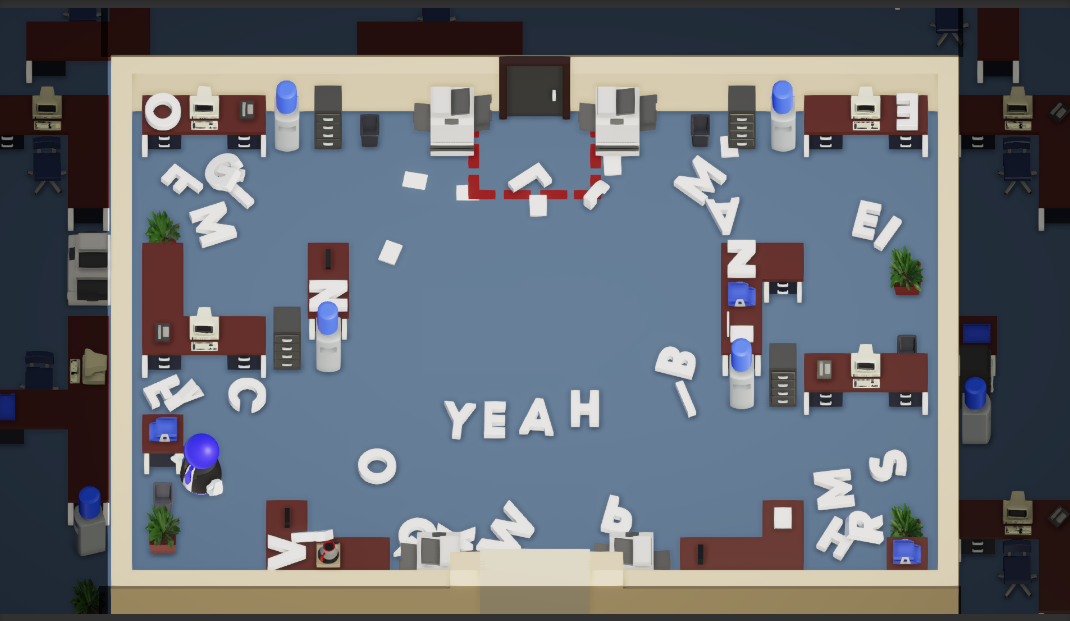 This coming week, our main focus is to add the final touches for PAX. Things like adding the other characters, adding an attract mode of sorts, and the big bucket item: reimplementing the break rooms. Rather than being traditional break rooms, we’re making the entire floor a whiteboard that players can draw on. Tony’s been hard at work over the past week, and he’s making really great progress on that front. I’ll be focusing on smaller issues like adding more particle effects where needed, and iterating on the (now outdated) tutorial.

Today during class, we were talking about adding a ball pit cheat to the start screen. I said why not?